This is the all-time modern question of mind-trickery and emotional confusion.

In seemingly better times for relationships, people who were together just remained together and made things work. Our grandparents were the champions of successful relationships. They overcame some truly difficult situations, and understood the meaning of commitment. Have you ever seen an old couple dining at Chili’s? Of course you have. It’s beautiful. You can just assume that they’ve been together since The Vietnam War and encountered some serious shit with each other.  They may be senile and have no recollection of the 1970’s disco era but you just know that they’re still madly in love.

Then we, the millennial generation came into existence. We brought along our iPhones, Yaz and a serious case of entitlement. Alright so I really do want to drive a Range Rover, drink Starbucks and get paid all at the same time but that’s not really the point. The point is that we have so many options in today’s world that everyone is overwhelmed with choices every single day. You may not even think about how many decisions you have to make in any given day, but it’s a lot.

One of those choices in the back of your mind is always having the option to just  call or text your ex to see what they’re up to .

“Maybe he has changed his feelings about me. Time heals. He misses me. I miss him so much.”

That’s always how it starts – small.

I’m a firm believer that people should do what will make them happy in the long run. Instant gratification sucks so don’t call your ex out of loneliness for just one night of casual sex. But If you and your ex can logically (take emotions out of the equation for a second) make sense of getting back together…then I say go for it. You have to fully understand what caused your relationship to break apart last time. Was it a one-time thing or is there a chance of it happening again? Make SURE that this can be fixed before you consider getting back together. You’ll have to talk about it with each other to make it clear that this thing absolutely cannot happen again.

If you know that there are issues between you and your ex that can’t be fixed then I say you really don’t want your ex back, as long as you want to keep your sanity. My ex believes in the power of guzzling hard liquor four days per week in Austin, Texas. After we broke up we talked about how our lifestyles just weren’t the same anymore and that nothing will work between us relationship-wise. We agreed to not see each other and we’re still sort of friends – everything is cool between us. But I’d rather be happy with someone who also leads a somewhat productive lifestyle.

Only you and your ex can make this decision. Maybe he’s a junior partner stud at a law firm who was just going through a temporary asshole phase when you two broke things off. Or he’s a weird street artist who actually loved you more than you thought. Whatever the reason for getting back together may be, think about the potential for mutual happiness in the long run and you’ll make the right decision.

If you decided that you really want your EX back, here is what to do first:

The discussion of love and relationships for the modern woman can be daunting and one sided. Many women feel like their opinions and ideas about relationships are not being heard. ChaCha heard those cries and delivered a bold new solution within the pages of the witty and informative new magazine Sleekly. Sleekly magazine is the premiere magazine that will tackle the topic of relationships. ChaCha has a deep passion for writing smart and sexy commentary that makes her readers laugh and think all while being fun. She understands that women need real life advice about relationships. As one of the editors of Sleekly magazine her job is to create a publication that speaks to the beautiful,intelligent, and ambitious young woman who wants a deeper insight into love and relationships. 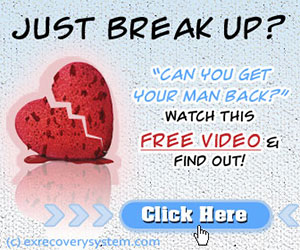