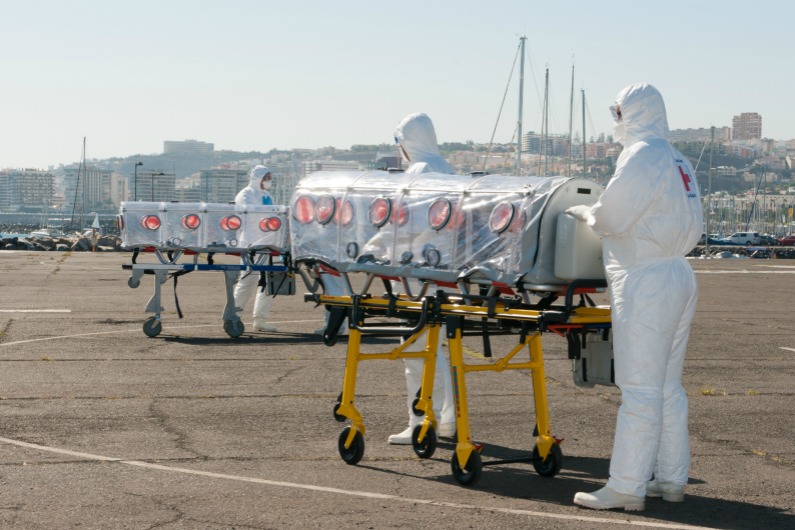 Workers with medical equipment for Ebola — Photo by JoseTandem

Pick up any newspaper or switch to any news channel and you will doubtless be assaulted by the thousands of images of panicked civilians, looking for a way to be saved from Ebola, a virus which has reportedly affected up to 9,000 lives worldwide. The Centers for Disease Control, or CDC, has reported that the risk of an outbreak in the United States is very low, but the simple report of one Texas patient dying after being afflicted with the virus, quickly followed by two health care workers testing positive for the virus, has done little to set the public’s collective consciousness at ease.

However, while there should be very real concern about the virus – its symptoms, after all, include the potential for diarrhea and vomiting – it is possible that the media has caused greater panic than needed . With appropriate care for hygiene taken, it is possible to significantly lower your chances of contracting the virus. In addition, consideration should be given to limiting your exposure to those who have been infected.

According to statistics recently released by the CDC, as of October 8, 2014, 8,376 cases of Ebola have been reported worldwide, and of those, 4,024 have died. The lion’s share of cases have been isolated to West African nations like Sierra Leone, Guinea, and Liberia, which appears to have been hit hardest by the outbreak with over 4,000 confirmed cases of the virus and over 2,300 deaths.

Senegal, Spain and the United States have each reported Ebola cases, with additional patients being tested for the virus in Canada. The Emergency Operations Center has been put into operation by the CDC while the CDC is also working with the World Health Organization (WHO) and other government agencies in order to help prevent the spread of the virus throughout the US.

If untreated, Ebola is a fatal disease in almost all cases. Also known as Ebola hemorrhagic fever, the disease is transmitted from wild animals to humans and first appeared in 1976 in the Sudan and the Democratic Republic of Congo. The disease takes it name from the Ebola River, near where one of the first outbreaks occurred. The death toll of the current outbreak has surpassed all the others combined. The average fatality rate hovers at around 50 percent. Currently, there is no known vaccine for the virus, but there are some potential ones being investigated.

Ebola is a virus characterized by fever, headache, diarrhea, vomiting, stomach pain, unexplained bleeding or bruising, and muscle pain. It is during these early stages when symptoms of the virus are present that the disease becomes contagious, and it can take up to 21 days for symptoms to show. If symptoms do not show, the person has not contracted Ebola.

It can take up to 21 days for symptoms to present themselves in Ebola patients. The virus is not transmitted through casual contact, air, water, or through food grown or purchased in the US.

Ebola can be transmitted through direct contact with any bodily fluids of someone sick or someone who has died from Ebola; contact with objects that have been contaminated with Ebola, such as medical equipment; or contact with infected animals. The virus can only be spread after symptoms start, and symptoms can present themselves in patients anywhere from two to 21 days after patients have been exposed. This is why it is absolutely critical that medical professionals or anyone who has the potential for contact with Ebola patients adhere to proper medical protocols.

To be sure, this has caused the greatest degree of concern worldwide. Once the disease hit North American shores, it appears as though concern has almost reached panic levels in some areas. This is not to diminish the very real concern that surrounds the virus; as a virus that can cause fatality in 50 percent of all cases, Ebola is definitely worthy of scrutiny and of concern. However, being smart about the statistics and the information is critical.

According to the CDC, there are currently only three cases in the US of Ebola. One of these patients died. There is some debate as to how the health care workers in this case became infected, but at this point, it does not really matter how they became infected. The blame game is not going to help anyone, and it certainly is only going to fuel further speculation about proper medical practices for disease containment and whether or not they have been followed, and that is not going to help the public in the slightest.

Unless you are likely to visit someone affected by Ebola, or attend a hospital where Ebola cases have been diagnosed, or even go to an Ebola-affected region such as the regions already identified in Africa, your chance of contracting the virus is very low. It is critical that you ensure you follow proper hand washing practices in addition to taking the time to disposing of any medical equipment that may have been contaminated by the virus properly.

Cases of Ebola have occurred in people in Africa who have been exposed to infected bats or who have handled bush meat. There have also been two laboratory related cases in Russia and one in England.

Of course, everyone who has read about Ebola is immediately worried about how to prevent exposure to the illness. If you are planning on visiting an affected country, follow careful hygiene protocols. Do not handle items, including bedding and bandages, that may have come into contact with an Ebola patient. Avoid contact with bats or non-human primates that are infected, and avoid burial rituals where handling of the body of Ebola patients might be involved. Finally, you should avoid hospitals where Ebola patients are being treated.

Health care workers can prevent transmission of the disease by following much the same protocols as the average person who might have been exposed, but they must also take greater care. For instance, health care workers should wear personal protective equipment to limit their exposure, and they should avoid direct contact with someone who has just died from the illness. In cases of health care workers and of people who aren’t in the health care industry, health should be monitored for 21 days after potential exposure, and if symptoms of the disease are present, you should go straight to the nearest hospital and report what symptoms you have.

Treatment of Ebola is focused on treating symptoms, as there is no vaccine that exists yet for the illness. In addition to treating infection as it crops up, the focus is on rehydration, balancing electrolytes and providing fluid through intravenous lines. There are some experimental vaccines, but none have been approved for widespread use or have been tested for safety.

While Ebola has been declared a Public Health Emergency of International Concern by the Director-General of WHO, the public at large should be no more concerned about Ebola currently than they might have been previously. Risks of North American residents contracting the illness are very low, unless they are health care workers who have been exposed to Ebola patients or they have traveled to countries where the risk of Ebola spread is high.

The bottom line is, while it is important to take precautions about the disease as you might with any other disease, it is equally important to realize that simply because the illness is highly publicized currently – and with good reason, as a number of countries are affected – does not mean that your personal panic button should be hit right away. Take a breath, be informed, and try not to be swept away by the panic. That could be as great a problem sometimes as any disease itself.